Majlis Shuraye Meli (The National Consultative Assembly) opened for the first time after the victory of Iranian Constitutional Revolution in 1906; and Iranian political parties officially started their activities since the Second Malis. However, since that time Iranian parties existed, they performed and functioned ostensibly and superficially. It was due to fact that the structural foundation of Iranian society remained quite similar to pre-Constitutional Movement era. Also, existing parties, instead of raising public participation in politics which is one of its important duties-, were competing with each other and this culminated in assassinations and excommunications. As a result, these parties not only didn t display a peaceful picture of political competition, but also they became an important factor in conflicts within the society because the conception of party was reduced to those secret pre-Constitutional associations. Instead of attracting ordinary people, parties were engaged in attracting the rich and power-brokers. Wherever they were able to do anything, as a result of conflicts between parties or influence of tyrants or foreign countries, theycouldn t be successful. On the whole, from Second to Fifth Majlis, a slight progress occurred within this Assembly, but mostly they were suppressing their competitors and waste their time for political quarrels, not political competitions. During that period of time, opportunists used these parties as legal means. For example, Rezakhan could demolish the Ghajar and call himself as the King of Persia, using parties within the Fifth Majlis which were supporting him. Consequently, at the first stage of their activities, parties were puppets in the questionnaire which has been prepared via referring to control participants. The statistical sample is 320 persons of Tehranian Muslim citizens who are over 15 years of age which comprise two groups. One group is donating tissue and organ (with organ donation card) and anther group do not donate. The description and analysis of data has been done in three levels. Descriptive statistics has been used in one-variable situation analysis (one-dimensional tables and distribution figures). Inferential statistics has been used for the analysis of two-dimensional tables. Regression has been used in multi-variable analysis. The findings of the study show that organ donation is related to the individual characteristics such as: age, sex, gain of physical health, social features socio-economic status, personality, Universalism. People's attitude towards donation and social trust as the out put of personality trait. The more literacy, the more knowledge of the subject, universalism, trust and positive attitude towards organ donation, the more willingness to donate organs. In contrast, the more gain of health, age and social status, the less organ donation. Findings of the regression analysis also show that, trust in medical profession and universalism play the most important in determining organ donation in regression model, respectively It's note worthy that hands of power-brokers and that period came to an end through theparties defeat and formation of dictatorship from the Constitutional Movement. Because, although political parties were heralds of the modern era, pre-Constitutional relations were still ruling over and parties were born before the formation of any political, social, economical or cultural construction, and as those parties were in conflict with existing constructions, theycouldn t do their duties properly and they acted only as a deficient version on parties in other countries. 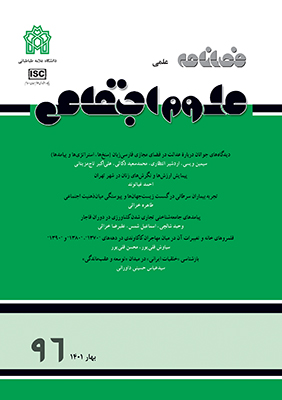